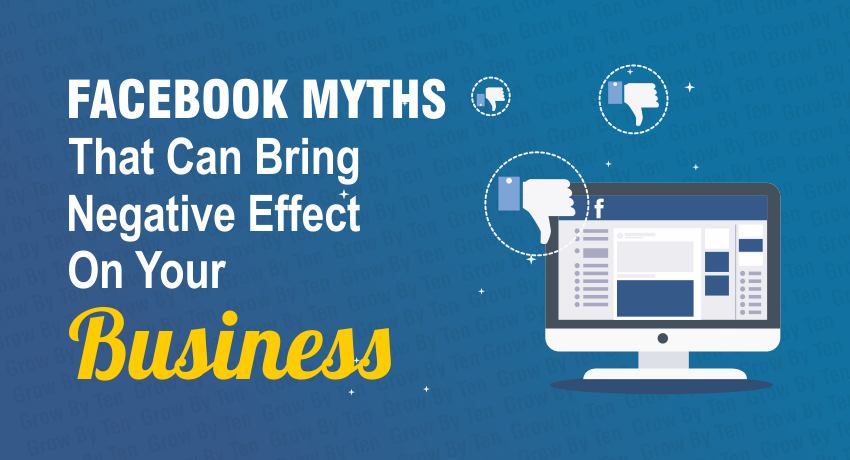 Facebook is one of the most used platforms nowadays. It is so famous that soon it will reach one billions of members. There are many things said about this platform, some are positive and some are negative. There is high number of advantages of Facebook. Earlier it was used for establishing contacts but now it is used as a profit maximising medium. It has become a necessity of every living human in the society. As every coin has two sides, one is negative and other is positive.According to that, we’re about to embark on some serious myths about this platform. Social media is now purely integrated into our lives, and businesses can use social media to uncover prolific success and benefits.

These myths are so popular and attention catching that if we try to ignore them, then they over power our mind with negative thoughts. It’s very important to know the both side of these myths and avoid them for your success. It is natural that you can’t just promote a photo or status update on Facebook anymore.

It will be soon washed away in a sea of eye-catching content, the most prominent of which is automatic-playing videos. The creative ideas grab the attention of different businesses and the monotonous one remain like this only. While it is quite possible for huge brands and corporations, creating bright, vivid video content is unlikely to be high on the agenda of many small businesses. So, if you are looking for large amounts of engagement on Facebook so you need to ignore the myths and you have to perform basic research behind every possible reason.

Myths are generally created by normal users. At once, they experience some downfall in their business then they usually consider that as a wrong step. We all work on the foot step of others and keep on believing those useless myths. Before following others you should research about that specific thing so that in future you will not face bad consequences. Don’t believe on something which is not providing you benefit. Before following the other check the path properly.